U-Bahn is the metro service of the city of Vienna, Austria. It belongs to Wiener Linien. The metro was inaugurated on February 25th, 1978. It has five lines and 104 stations. It makes connections to buses, trams and many trains, like the Stadtbahn, all of which belong to Wiener Linien. The metro does not go directly to Vienna International Airport, but it can connect to the S-Bahn to bring you to the airport. The metro opens every day, from around 5:00 am to around 1:00 am. The metro's ride has prices from €1.10. You can show your ticket to the metro driver so they can tell you where you came from in case you get lost. As a fun fact, the excavation of tunnels for the metro led to the discovery of old artifacts. A new line, U5, is planned to be built by 2023. You can go to many touristic attractions in the center of Vienna using the metro from the Stephansplatz station.

The city of Vienna is the capital of Austria. This city was part of an old empire, giving the city historical importance. This fact made Vienna to be protected by UNESCO. Vienna has a population of over 1.6 million people, which makes this city the most populated in Austria. Vienna is the most important city in Austria regarding politics and economics. The city is divided into 23 districts. Temperatures during the year can be as high as 26º C, or as low as -2º C.

The city's airport is called Flughafen Wien-Schwechat (Vienna International Airport.) The city has the following means of public transportation: buses, trams, commuter rail, rail and the metro. The city's transportation network is all within one zone. In other words, there is no need to pay an extra fare to travel to other zones as long as you stay within Vienna. Rail services are comprised of the S-Bahn, the RegionalExpress, and the Regionalbahn.

The metro, also called U-Bahn, belongs to the Wiener Linien company, which also owns other trains, as well as buses. The metro is ridden by over 1.2 million people per day, which makes the U-Bahn one of the most ridden metros in the world. It is one of the most modern metros in Europe.

How to use Public transport in Vienna for Tourists

Between the years 1840 and 1960, there were plans to build the metro in Vienna, but the idea got constantly rejected. The first train service in Vienna was the Stadtbahn, which was inaugurated in 1898. The Stadtbahn was ineffective for transporting a lot of people. Consequently, the idea of constructing an underground train was proposed in 1910. These plans were interrupted because of World War 1. The government of Vienna took interest in building the metro once more between 1912 and 1914. The government decided to abandon the idea of building the U-Bahn during the late 1920s due to the poor economical state of the country. The metro was planned to be constructed again in 1937, but it was interrupted because of World War 2. The government in Vienna finally decided to build the metro on January 23rd, 1968.

The U-Bahn began to be built on November 3rd, 1969. The first station to be built was Karlsplatz. Lines U1, U2, and U4 were the first lines to open to the public. The metro was tested on May 8th, 1976. The metro was officially inaugurated on February 25th, 1978. Line U6 opened to the public in 1989. Later, line U3 was inaugurated in 1991, with the opening of the stations between Erdberg and Volkstheater.

The metro has five lines: U1, U2, U3, U4, and U6. These lines have a total of 104 stations. Almost all paths are underground, except for the U6 that is partly circulating by surface. We might use the underground (U-Bahn), tram, railway (S-Bahn) and bus with the same ticket as it is an integrated fare system, which makes it very easy and quick moving around the city. The stations for each line are the following:

U4 (green line): This line is used by most visitors to the city because it covers all the downtown and the major monuments of the city, including the Schönbrunn Palace. It has the following 20 stations: Hütteldorf, Unter St. Veit, Ober St. Veit, Hietzing, Braunschweiggasse, Meidling Hauptstrasse, Schönbrunn, Margaretengürtel, Längenfeldgasse, Kettenbrückengasse, Pilgramgasse, Stadtpark, Karlsplatz, Landstrasse, Schottering, Schwedenplatz, Friedensbrücke, Rossauer Lände, Spittelau, Heiligenstadt

U-Bahn makes connections to other means of transportation that are also owned by Wiener Linien. This includes trams (like the S-Bahn, which is a suburban rail), buses (1 to 99), Nightline and Collective Taxi. It also makes connections to the Badner Bahn tram to the metropolitan area. This tram belongs to the Wiener Lokalbahnen company. 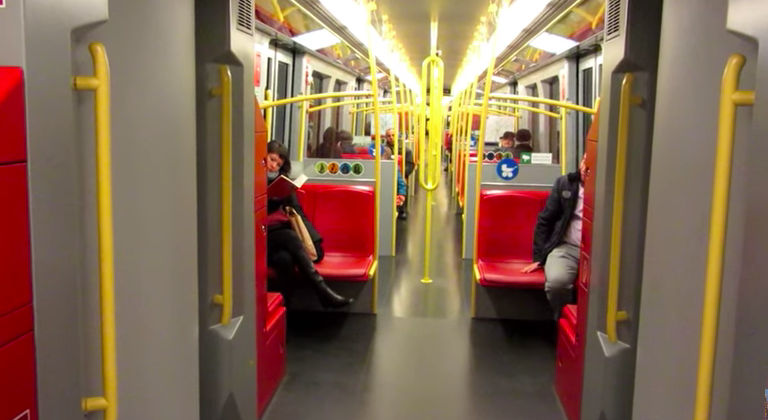 The Flughafen Wien-Schwechat (Vienna International Airport) is the city's airport. The metro does not go directly to the airport. Instead, you need to make a connection with the trains of the S-Bahn. From the airport, take an S-Bahn train in line S7 towards Floridsdorf (costs less than €5) and arrive to Wien-Mitte station. From here, you can take the metro in line U3. If you wish to go to the center of the city, take a U3 train in the metro from Wien-Mitte station to Stephansplatz station.

The frequency depends on the moment of day but there are trains available every 5 minutes on average. Frequency varies from 2-4 minutes in rush hour to 7-8 minutes afterm 20:30. On Friday and Saturday nights and the eve of public holidays there are trains every 15 minutes. The metro is open every day, including holidays. The opening and closing times from Monday to Friday for each line are the following:

The opening and closing times for the metro during Saturdays, Sundays, and holidays are the following:

Tickets and cards are available to pay the metro's fare.

B) Cards: They are divided into Vienna Visitor and Yearly Travel Card.

You can ask the metro driver to check where your ticket was stamped before you boarded the metro. This way, you can return to the previous station in case you get lost.

The following behaviors are prohibited inside the metro:

Dogs do not require a leash nor a muzzle if they are inside a cage. You do not have to pay to bring your dog as long as it is inside a cage. Dogs need a leash and a muzzle to enter the metro and in the station’s elevators.

You can bring bicycles for free in the metro. When you board the metro while bringing your bicycle, you need to stay where a blue bike picture indicates you to stay. You also need to enter the metro via a door with the blue bike picture if you bring a bicycle. The times when bicycles are allowed are: Monday to Friday: 9:00 am to 3:00 pm, and from 6:30 pm until the station closes. Saturdays, Sundays, and holidays: You can bring your bicycle anytime.

Make sure to not to obstruct escape routes nor guidance systems for the visually impaired. Put your thrash on waste containers. Be respectful to other passengers.

Line U2 will have five new stations in 2023 in Rathaus, Pilgramgasse, Neubaugasse, Reinprechtsdorfer Strasse, and Matzleinsdorfer Platz. A sixth station is planned, which will be built in An Den Alten Schanzen, but has no date of construction. Map via www.wienerlinien.at
See map full resolution. It may take a little bit to load.