Yerevan is the capital of the former soviet republic of Armenia and by far the largest city in the country. It has 1.2 million inhabitants. The Yerevan Metro opened on March 7, 1981 and is the eighth underground system to be built in the Soviet Union. Yerevan Metro is a single subway line that crosses the city from northeast to southwest. Its' 13.4 kilometers long and serves 10 stations. The initial approach in the 60's planned the construction of a light rail with an underground section and at the end, due to the population growth in the city, a full underground system was built.

Yerevan also has a network of minibuses that competes for users with Yerevan Metro. In 2012 the underground was used by 14.9 million passengers. That is 60,000 passengers a day, until tickets raised in price, which led to a decrease of 50,000 passengers daily.

Yerevan Metro was extended to the south until 1986. About 10 years later, an independent shuttle service at surface level linking Chengavit station to Tcharbakh in the south was built. The main line is underground from Baregamutyun to Zoravar Andranik and after Gortsaranayin, so that only David and Gortsaranayin Sassountsi stations are at surface level.

The first line is being continued to the northwest. This line now reaches Razdan river, but it can not go further until a bridge is constructed. Though at the moment there is no budget nor dead line, there are plans to continue this route beyond the river.

There are also planned a second and third lines to expand the Yerevan metro. Line 2 will cover the north and south areas of the city and will join the center with Yeraz. The third line would cross the city from east to west and will intersect with line 1 station Yeritasardakan

A single ticket on the subway costs 100 drams. Initially the ticket cost 50 drams but there was a rise in rates. Tickets can be coins or cards that are recharged with credit.

Users enter the stations through turnstiles. The payment used to be made with 5 kopeck coins, later replaced by tokens. Since May, 2009, both tokens and plastic cards have been used and soon the use of smart cards will be added.

The system is so well designed from a technical point of view that even after the famous earthquake that struck Armenia in 1988 minor damages were caused and normal operations were resumed next day after the disaster.

Yeravan metro is one of the cleanest in the world. As stations Minsk and Moscow, many of its stations are beautifully decorated with Soviet-style.

There is no Park'n Ride services but at several stations, such as Barekamutyan and Marshal Baghramian, there are areas where you can easily find parking either free or paying some fees. Parking might cost 100-200 drams regardless of the duration. 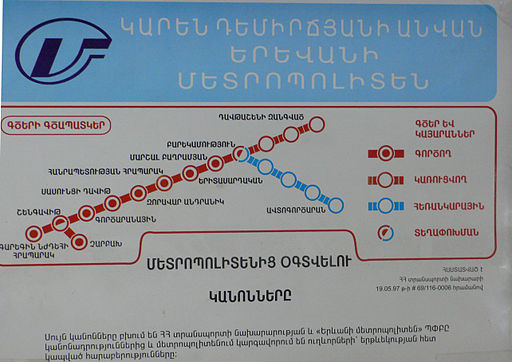 Map via www.metrosoyuza.net
See map full resolution. It may take a little bit to load.